skip to main | skip to sidebar

steam
1 pound carrots, peeled, and sliced
1 yam, peeled and sliced
1 portion of fresh peeled ginger root (about the size of your little finger)

add the steamed vegetables to the sauteed veggies, then add the water used to steam the carrots to the pot, and simmer for 1 hour, or until all the veggies are soft. Then, using an immersion blender or a regular blender in batches, puree the ingredients until the desired consistency is achieved.

serve warm, with yummy rolls on the side

I call this soup pepper soup because when I made it the first time, I added way too much pepper, at least according to what my wife said when I was making it. When it came time to eat it, however, after I added the ginger, orange zest and orange juice, it was actually perfect, with just a little bit of heat on the back end. Okay, it may have been really spicy, but still excellent!

Enjoy with someone you love!
Posted by Jason at 12:30 AM No comments:

I love to make homemade egg rolls, and these are DIVINE!
First, you have to cook your chicken. I start by chopping it into very small cubes, we're talking maybe a half inch or so, and then saute it in olive oil with salt and pepper and quite a bit of lime juice. When the chicken is just browning, toss in the tofu, cut into the same size cubes.

In a large mixing bowl, add all the ingredients. (You need to soak the bean thread noodles in warm water first.) Mix together.

Then you need to wrap your egg rolls! You need a small glass or dipping container of some sort of water mixed with a tiny bit of cornstarch. You start by laying the wrapper like a diamond. (Make sure that you keep the other wrappers covered while you work, they dry out so quick! I like to use a wet paper towel.) Put about 2 Tbsp of the filling in the middle, in a semi-line. Start by folding the top over. Then, fold the sides over. You want to keep this tight. Roll it until you are almost at the end, and then dip your finger in the water/cornstarch mixture and wet the tip. It will stick.
I lay them on a cookie sheet, and keep them covered with a dampish dish towel so they don't dry out. When you are all done, deep fry until just golden brown. Delicious, and surprisingly quick!

(I also saw on a cooking show that you can bake them in the oven if you brush some oil on them. Cook at 400 until golden brown. They supposedly are really crispy. I haven't tried it.)
Posted by Amanda at 7:10 PM 1 comment:

BEST FROSTING EVER. EVER. (For cakes) EVER 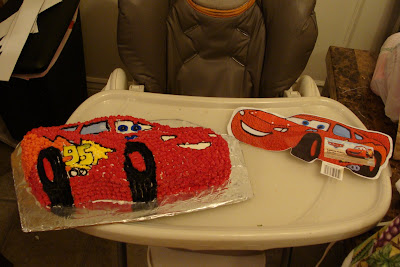 Side by side view of the miracle frosting at work. 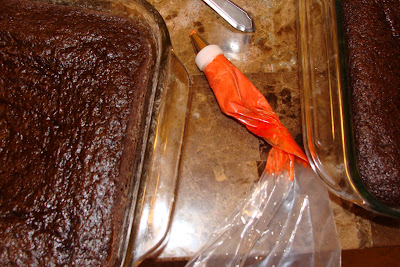 I should not have been frosting that cake at three in the morning. Maybe them it would have taken me less than 10 minutes to realize that I didn't really need to go to the store for orange, 'cuz I had yellow and red and mixing the two would give me orange. Sorry people, I'm a leettle slow. 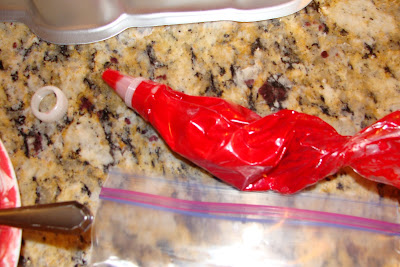 Red frosting. Chiltons is the best, they have stuff that is thicker than the liquid food coloring you can buy at the grogery store-and remember, a little bit goes a long way! Except for the red-that took two bottles. 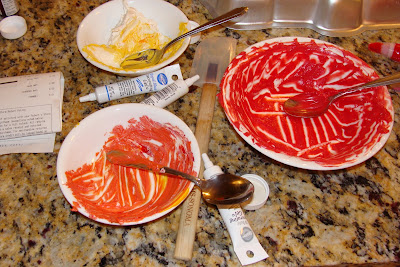 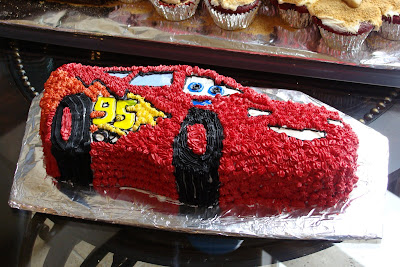 Finished product. Actually tasted good. People said so. And they consumed it.

Ingredients
8 egg whites
13 ounces (by weight!) of sugar (regular, NOT powdered)
1 pound of butter at room temp
1/4 cup margerine at room temp
1 teaspoon vanilla
food coloring as needed
Procedures
1. Take, 8 egg whites and 13 ounces (by weight-I know, you need a scale, this would be the excuse you need to get one) and place in a double boiler.
2. Heat and stir constantly until mixture reaches 140 degrees.
3. Transfer to a stand mixer and mix until you get stiff peaks (I used a hand mixer-took for-ever) and mixture reaches room temprature.
* If the mixure is still too warm, and you are using a stand mixer, use ice on the side of the bowl to cool the stuff off-if using a hand mixer, like I was, place the bowl with the frosting in a bigger bowl with a little bit of water and ice. As you mix with your hand mixer, let go of the bowl and it will spin in the ice water and cool itself right down.
4. have 1 pound of butter and 1/4 cup of margarine at room temprature ready. As you are mixing your high stiff peaks, slowly add the butter/margerine, and 1 teaspoon of vanilla. If it is still too runny, it is still too warm.
5. As you finish adding the fat, the mixture will stiffen up and look just like frosting. At this point, it is ready for use.
Posted by Jason at 10:34 PM 1 comment: 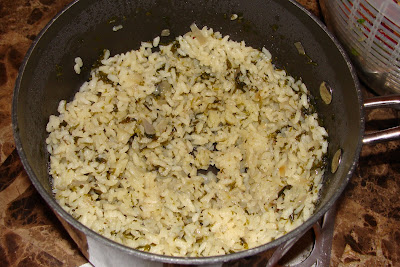 the pictures are out of order because the internet stinks, but we can work through this together. this picture is of the finished product, which i remembered to photograph before i devoured it all. 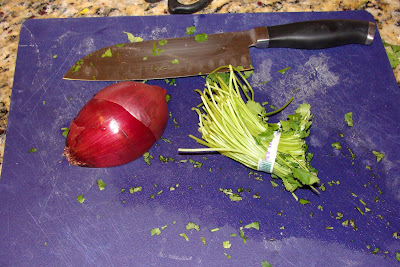 ingrediants:
one bunch of fresh cilantro, chopped (minus the stems)
one half of an onion, chopped
olive oil or butter, for sautee purposes
1/3 cup sugar
1 1/2 cups of chicken broth
1 1/3 cups rice 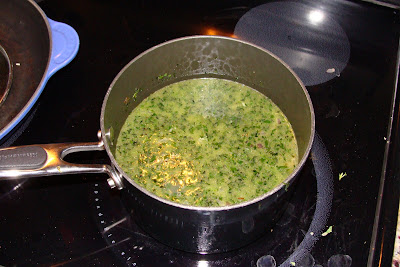 procedure:
1. heat rice pot to medium and sautee onion with olive oil or butter until onions are opaque
2. add chopped cilantro, for a minute or so
3. add rice and sautee for 3-5 minutes
4. add chicken broth and sugar
5. bring to a boil, cover and simmer for 20 minutes
6. enjoy the best sweet rice ever! 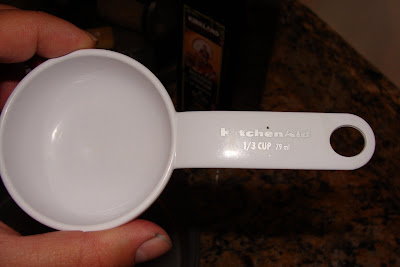 everything is done in thirds of a cup, except for the chicken broth. lately i've been adding an extra third cup of rice and 2 cans of chicken broth, because 1 1/2 cups of chicken broth leaves my with half a can of broth. i should probably increase the sugar, too. 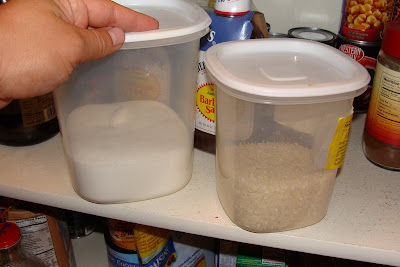 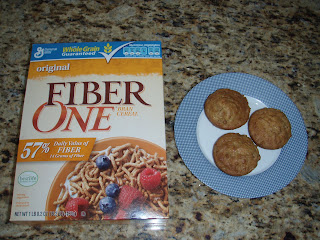 This recipe makes a lot of batter. It stores in the refridgerator for up to 6 weeks. I make it in my big tupperware bowl with a lid.

Alternate adding flour mixture and buttermilk to butter sugar mixture. Keeping it moist at all times. Once you have combined all buttermilk and flour add fiber one that has absorbed all of the water. Mix together well. Put in ungreased (teflon coated) muffin tins. Bake 400 degrees 18-20 min for regular muffin tin and 12-14 min for mini muffin tin. Great for a quick, hot breakfast.

So saturday I put a pork roast in the crock pot. I followed Jason's recipe to the tee. And it was so delicious. I was amazed how easy it was. I was nervous that I cooked it too long, but to my suprize it was fantastic. I used a pork rub, black pepper, and garlic powder to season. We enjoyed to so much that yesterday I put a chuck beef roast in the crock pot to see how it was. Well it was just as fantastic. Thanks for the great recipe.
Posted by Overall Family at 9:31 PM 1 comment:

I love butternut squash. It's tasty and versatile and it's big. Oh, and it's super healthy too. So, when I make it, it's usually a multipurpose deal. This is a little blurry, but you get the picture: 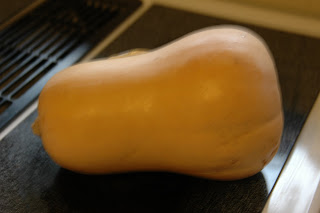 Just halve the squash and throw it in the oven. Ben and I were of different opinions regarding whether you put it meaty side up or down. In the end, I don't think it matters. I think it retains a little more moisture when you put it meaty side down, but it gets a little more of a roasted flavor meaty side up. For the record I guess I should disclose that we now usually cook it meaty side up and that's how Ben thought it should be (so I caved). Cook it for an hour to an hour and a half at 350 degrees, until a fork goes in easily and it's soft throughout. Then just scoop out the meat, add butter and serve with salt and pepper. 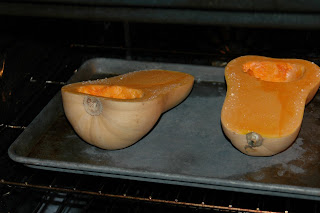 This saves a lot of money if you're at the babyfood stage. I just put it in the blender and add enough boiling water to make it the right consistency. Then, I pour or scoop it into ice cube trays. Once it's frozen, take them out and put in a plastic bag. They'll get less freezer burn that way, but be easy to access in single serving amounts.

OK, enough of that, here's the real recipe of the day...

This is for half a large squash. When I made this, Britta and Morgan wound up staying for dinner and Morgan was pleasantly surprised. I don't think she was particularly enthusiastic before she tasted it, but then she liked it.

Here's what you need: 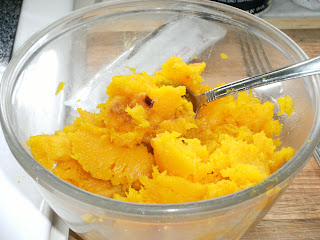 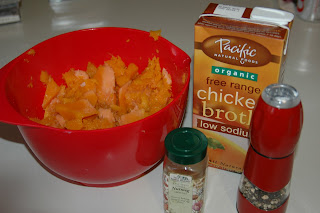 One half a squash, baked (I know it's there twice but the first bowl is a lot prettier).
Chicken broth (about 15 ounces which is a regular can)
Salt and pepper
Nutmeg
One small yellow or white onion, diced (pretend that's in the photo)
Butter, about 2-4 Tablespoons (ditto)
About 1/4 cup cream or sour cream (ditto) 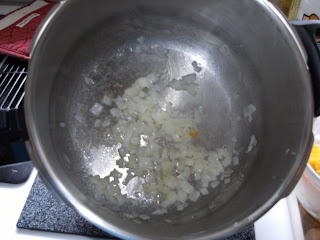 Saute the onions in the butter until they're translucent. I've used olive oil, but I don't think it's quite as good a flavor. 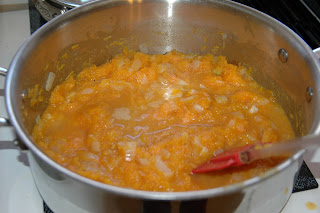 Add the squash and saute until it gets prettty mushy (how long depends on how long you baked it - the original recipe I adapted uses raw squash but I find baked is faster and easier and has a roasted flavor). Then add the chicken broth and cook it down for about 15 minutes on medium, stirring occasionally.
Add the salt and pepper to taste and then just about 2 dashes of nutmeg (be careful not to add to much, but do it to taste).

Take the mixture and put it in a blender. 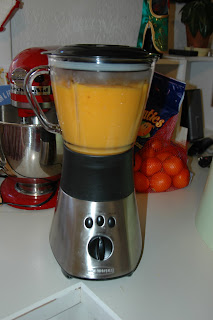 Blend until it's got a nice creamy texture. If it's too thick, add more broth.
Remove from blender and put in bowls. Add about 1 T of cream per bowl and mix with a spoon prior to serving. If you want to get fancy like a restaurant, you can use sour cream and make a pretty design on top of the soup or just a dollop and a tiny bit of nutmeg.
I of course didn't get a picture of the soup in bowls because I was feeding my family plus Morgan and Britta and our neighbor Lisa who happened by at the right time. But it looks just like it does in the blender, only in bowls.
Enjoy.
p.s. Since it says "Clyde and Family", I thought I'd tell those of you who didn't know that it's actually Laura (Ben's wife, Amanda's aunt, Kara's sister-in-law) who posted this. Buen provecho!
Posted by Laura at 9:39 PM 2 comments: